If you spent anytime alive during the last 30 years, you’ve heard from these three bands. 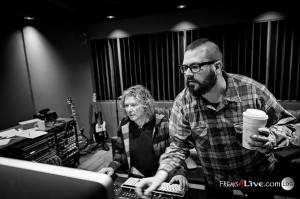 LIVE, famous for “Lightning Crashes”, “I Alone”, “Lakini’s Juice”, “The Dolphins Cry” and many more are currently mastering (with Jerry Harrison of Talking Heads fame and the master Tom Lord-Alge) their first studio album since 2006’s “Songs From Black Mountain”. The band is back, with new frontman, Chris Shinn, who appears to be a promising vocal talent. 3/4 of LIVE had spent a year touring with Sean Hennesy and Kevin martin of candlebox as The Gracious Few, releasing a killer album and playing amazing shows. This album is make or break for the band but I have plenty of faith in them. they are some of the nicest guys around. Keep your eyes open this IndyCar season as they are sponsoring a car. Ironically, my first concert was seeing them perform at the Indy 500 carb day show.

The Band LIVE Indy 500 Commercial 2013 (OFFICIAL) from Freaks4Live on Vimeo.

Counting Crows have after years of touring, a live album, a covers album, and promises of new material, are finally back in the studio. Their last, “Saturday Nights and Sunday Mornings” is one of their best. many band have slumps and dud albums, but Counting Crows, at least in my opinion, have never faltered. Expect another great album from Adam Duritz and Co.
Counting Crows twitter:https://twitter.com/CountingCrows

Better Than Ezra has sign with The End Records, and is set to release a Studio album this summer. BTE has released some amazing songs over the last 20 years, “Good”, “Desperately Wanting”, “Juicy” and more.

New Tour Dates Announced! Head over to http://t.co/gZ6inJPstm for details + ticket links. See you on the road! #ezralites #music

The New Orleans-based band is also touring this summer outside of their normal New Orleans shows, which is great news for folks who haven’t seen them since “Paper Empire” came out. Keep your ears open for New BTE in the near future!
Better Than Ezra Twitter:https://twitter.com/betterthanezra